Relief Of Shapur I Triumphing Over Roman Emperors

Relief of Shapur I

The triumph relief of Shapur I (r.241-272), the most famous Sasanian rock relief from Naqš-e Rustam, is very close to the tomb of Darius I the Great. It shows how king Shapur has defeated two Roman emperors. 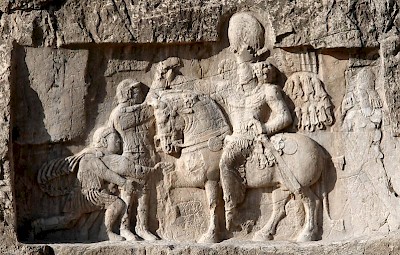 The historical events depicted are these. In 244, the Roman legions invaded Mesopotamia and besieged the Sasanian capital Ctesiphon, but the war lasted long, and the Roman emperor Gordian III was replaced by Philippus Arabs, who was forced to conclude a peace treaty with Shapur. Philip even paid a ransom and was happy to return alive, allowing Shapur to present the events as if the new Roman ruler owed the throne to the Sasanian king. So, we can see the emperor Philip kneeling in front of the king’s horse. 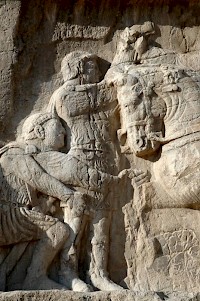 The standing man, seized by the hand by Shapur, is the Roman emperor Valerian, who was taken captive in 260. The relief at Naqš-e Rustam, therefore, has to be dated after this event. A more elaborate version of this monument, which also shows a dead emperor Gordian, can be seen at Bishapur (relief II).

Behind the triumphant Shapur, to the right we can see his high priest, Kartir, who is saluting the king with the gesture of the fist and index finger. (This gesture can be seen on many Sasanian rock reliefs and is still made today by the nomads of the Zagros Mountains.) This part of the relief was added during the reign of Bahram II (r.276-293). 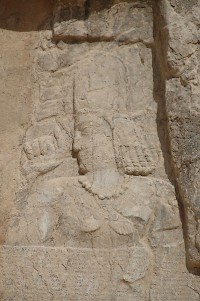 Kartir had been able to promote Zoroastrianism, which was made into the Sasanians’ state religion. He was also responsible for the persecution of Christians, Jews, and Buddhists, and instigated the death of the prophet Mani, thus giving Manichaeism its first and most important martyr. The scissor-shaped emblem on his cap allows us to identify the high priest. He can also be seen on the Audience Relief of Bahram II, among the dignitaries represented at Sarab-i Bahram, and at the relief at Sar Mashhad.

It is interesting to notice that Shapur’s own account of his wars against the Romans was inscribed on the walls of the Ka’bah-i Zardusht, just opposite the relief. 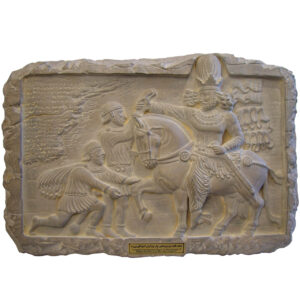