The Shami Statue is one of the main surviving works of Parthian art. It is currently in the National Museum of Iran (Inv. no. 2401) and was found at Shami (modern Khūzestān Province), where there was an ancient sanctuary.

The bronze statue is 1.94 m high. The man depicted is shown frontally. The figure’s head is slightly too small in relation to the rest of its body and the face has a plain, unmodelled surface with an aquiline nose. The man bears a short beard and a heavy moustache, while his hair is long and covers the ears. Around the head, he wears a wide ribbon. He wears a tunic with a V-shaped opening at the front and wears trousers. Around the neck, he wears a necklace, perhaps a metal ring. The left hand and the entire right arm are missing. In Shami, however, there was found a bronze arm which might belong to this statue. 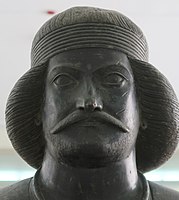 The Statue of Parthian Noble Man, the face

It is possible that the head and the body of the figure were crafted separately and put together in Shami, as the head is too small and made from a different type of bronze as the rest of the statue.

The high quality of the artwork caused some speculations of its production place. Some scholars believe that it was made by Greek or Roman artists. Others argue that it was produced in Palmyra or by an artist from this city, while others suggest that it was made in Susa (the nearest bigger ancient city).

The statue was found by local peasants but must have originally adorned a sanctuary at Shami, where several Hellenistic bronze statues were found. The statue depicts a nobleman from the Parthian Empire. 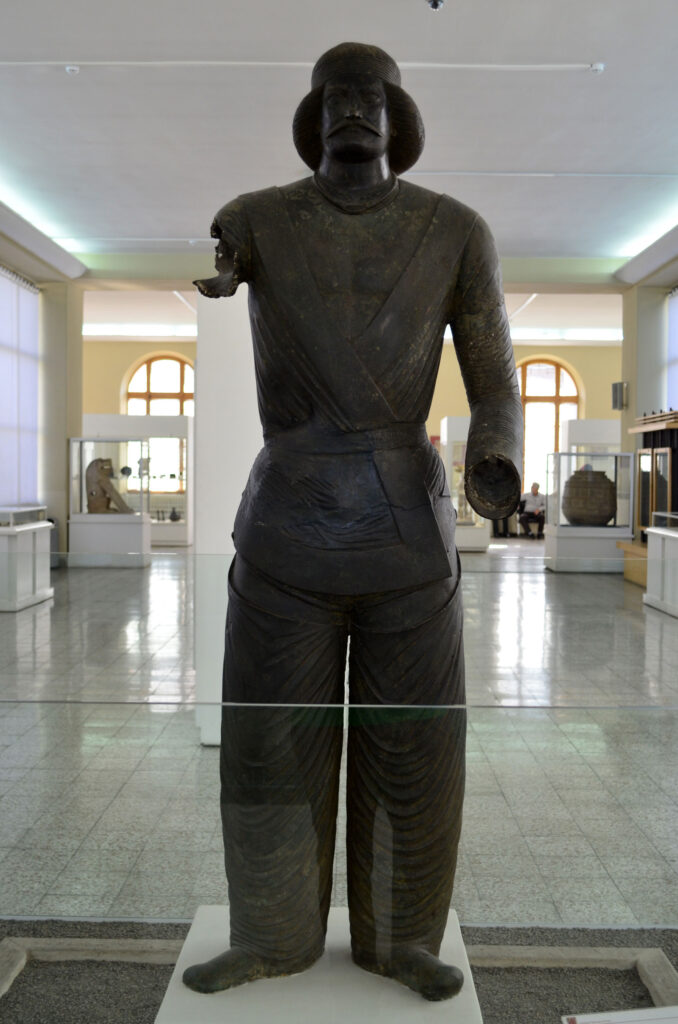 The Statue of Parthian Noble Man, National Museum of Iran 2401

One of the rarest surviving artefacts of Parthian art (247BC-224AD) is the Statue of Parthian Noble Man, preserved in National Museum of Iran 2401. It was found at Shami village, Izeh, near the ancient Susa.

This bronze statue is 1.94m (6.36 feet) high. The man’s head is slightly small in relation to the rest of its body. The man bears a finely modelled beard and a heavy moustache, while his hair is long and covers the ears. He wears a headband on his hair. He wears a tunic crossing on the chest and chaps over a sort of undergarment. The figure is clap in a short belted and long-sleeved jacket with broad lapels. This tightly fitting jacket is fastened with the right side overlapping the left, leaving a wide V-shaped opening over the bare chest, which is also held by a belt made of plaques probably made of metal and decorated with geometric motifs. Short trousers are worn under the jacket. Tube-shaped leggings which served as over-trousers cover the legs, leaving part of the upper thighs bare. The back of the Statue shows how the leggings covered the entire upper back size and then probably attached to a hidden suspender belt under the jacket.

The evidence of the headband and torque suggests the status a date between the middle of the first century BC and the beginning of the first century AD, this date range is supported by the appearance of the outfit on coins of this date. It is also assumed that the statue probably was produced locally due to the difficult terrain and inaccessibility of Shami.