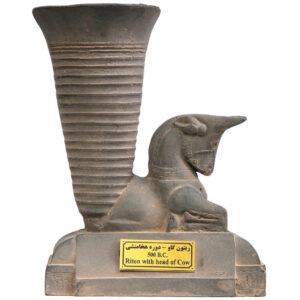 A rhyton is a roughly conical container from which fluids were intended to be drunk or to be poured in some ceremony such as libation, or merely at table. They are typically formed in the shape of an animal’s head, and were produced over large areas of ancient Eurasia, especially from Persia to the Balkans

The Rhython – the Greek name means “to flow” – was a drinking cup in the shape of an animal or a mythological creature (e.g., an Amazon or a centaur). It was used during official libation ceremonies and banquets of a more light-hearted nature. We can imagine the drinking games: because a person drinking from a rhyton gradually lifts the object and creates a vacuum in the animal’s head, the liquid is temporarily blocked from leaving the horn, forcing the drinker to lift it even more, until air suddenly fills the vacuum, a chugging sound is heard, liquid is released, and the drinker is soaked with wine.

Popular in Persia, rhytons appear in Athens suddenly and in great quantities in the years after the Persian War and were immediately imitated by artists from other Greek towns. It has been assumed that the Greek soldiers had found the Persian drinking vessels when they looted the enemy camp after the battle of Plataea (479 BCE).

Sometimes, drinking horns without animal head are called rhyton too.

Horn-shaped vessels ending in an animal’s head have a long history in the Near East as well as in Greece and Italy. Early Iranian examples are straight, with the cup and animal head in the same plane. Later, in the Achaemenid period, the head, or animal protome, was often placed at a right angle to the cup, as in this piece. In the manufacture of this gold vessel, several parts were invisibly joined by brazing, which demonstrates superb technical skill. One hundred and thirty-six feet of twisted wire decorate the upper band of the vessel in forty-four even rows, and the roof of the lion’s mouth is raised in tiny ribs. Typical of Achaemenid style, the ferocity of the snarling lion has been tempered and restrained by decorative convention. The lion has a crest running down his back; his mane has the disciplined appearance of a woven material; and his flanks are covered by an ostrich plume. The inclusion of the plume, a departure from convention, suggests that this lion is winged and has some supernatural significance. 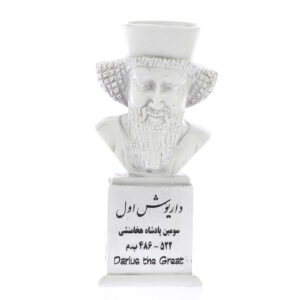 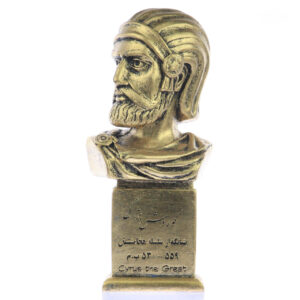 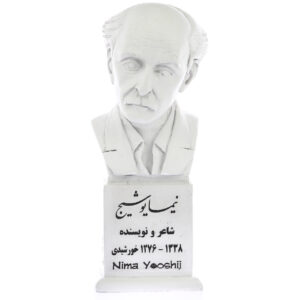 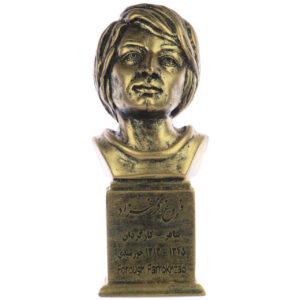 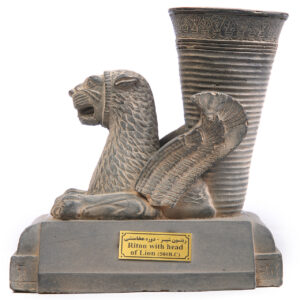